If you want to invest in cryptocurrencies but are not quite sure whether to invest in Bitcoin, this is your article! Have a look and discover the most important alternatives to Bitcoin so that you can make a good decision. 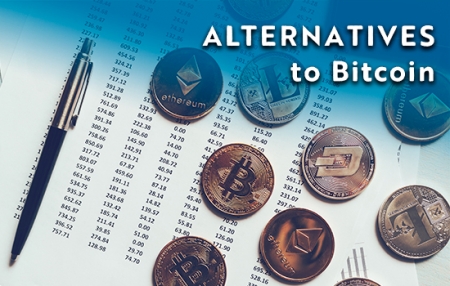 Alternative Cryptocurrencies Are Making Their Mark

When Bitcoin first emerged in 2009, no-one predicted the huge success that it would have. This virtual currency had something of a rocky ride at first, with some spectacular swings in value that made investors more than a little wary. Over the last decade, however, things have settled down, and virtual currencies are enthusiastically used by millions of people, all over the world. In fact, there are now over a thousand cryptocurrencies available, and some have been very successful. Let’s look at a few alternatives to Bitcoin that have rapidly established themselves in this exciting corner of the financial landscape.

A relative newcomer to the market is Dash. It started out in 2014 as Xcoin. Soon after launch, it was renamed Darkcoin, and it featured a DarkSend capability that combines transactions from two or more users before making them visible on the public ledger. This makes tracking of each individual transaction more difficult, while maintaining the overall transparency of the system.

The secrecy of the system and the vaguely criminal connotations of the word “Dark” appealed to some customers, but this was potentially damaging to the reputation of the brand. The founders understandably addressed this problem, and the currency was rebranded to appeal to a wider market. There is still an emphasis on speed and anonymity, but legitimacy is also a key marketing focus now. The idea behind the new name was to combine the two words “digital” and “cash” into one. This strategy has proved popular. Users still have the enhanced anonymity and they like the practicality of the InstantSend and PrivateSend functions, which really are very fast indeed.

The currency uses blockchain, of course, and it also has a system of masternodes, through which transactions pass. This is a network of human owners who have to invest a certain amount of cash into the company. These elite members, who are located all over the globe, can propose initiatives on any matter that affects the user community, including marketing, planning and any improvements or other changes. These expert users can also vote on proposals suggested by others in the network.

In effect, then, the currency has become one of the best-known decentralised autonomous organisations (DAO), with its own evolving governance built in to the structure. This innovative, distributive system of checks and balances is designed to avoid any covert power struggles and keep things transparent, which in turn promotes overall stability in the system.

Ethereum started operations in 2015. Despite the company’s late entry to the field, it has become second largest platform after Bitcoin. Unlike its biggest rival, it doesn’t have any absolute mining cap in place. Instead, there is an annual release mechanism that regulates supply. It was split into a standard and classical variant in 2016.

The platform's success lies not just in its ability to act as a cryptocurrency, but in its potential for enabling all kinds of decentralised applications. It operates on a system of smart contracts that are run autonomously, collecting payments in units called “ether”. This platform continues to impress investors with its performance and it has many supporters.

Monero, Litecoin, Zcash, Ripple and many others

A host of other currencies have appeared on the scene, and they all follow the same general principles as the market leaders mentioned above. Monero uses a proof-of-work algorithm that differs from some of the bigger company systems. Its enhanced anonymity has attracted many users since 2016.

Litecoin came early to the field, since it was launched in 2011 and it has witnessed steady growth since then. Zcash is a relative newcomer, trading from 2016, and it offers users a choice of different levels of anonymity, including special shielded transactions that are heavily encrypted. Ripple, which emerged in 2012, specialises in trading rather than mining, and this has the advantage of requiring much less computing power.

The future of altcoin mining and trading

It is well worth keeping an eye on these older platforms and watching for new launches. The technology used by cryptocurrencies is improving all the time. If you like the idea of anonymity and speed in financial transactions, you may want to consider widening your altcoin portfolio. This branch of trading is here to stay, and there are still plenty of opportunities to gain early adopter advantages before the sector begins to mature, and the banks start to take more of an interest.

I know this sounds a bit strange, but does anyone know any hotel companies that are worth investing in?  I have heard that Global Great Hotels are a good one, as there is another chat on here about them.  I love holidays and I have some money to invest, so it makes sense to me lol