Should I Invest in Precious Metals?

Investing in gold and other precious metals, such as diamond or copper, has become one of the most popular investments among investors in this 2018. Therefore, we offer our beginner's guide to Precious Metals so that you can make your move. 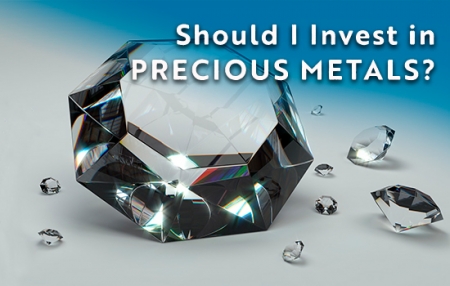 Everything You Need To Know About Precious Metals

Precious metals are quite rare compared to other types of metal and command a far higher value. They're often bought as part of an investment portfolio giving greater flexibility.

You have the option of buying stocks and shares in mining companies or buying physical products. The former can be risky unless you know what you're doing.

If you decide to go this route it's best to diversify across several different companies. Bullion is a far safer bet providing you've got somewhere to store bars or coins.

Buying bullion investment coins has become a popular way of adding to your portfolio. They offer far greater flexibility when it comes to selling, enabling you to get access to quick cash.

Bullion coins like property are a tangible way of investing as they're not at the mercy of financial institutions. Coins have the edge though as they don't incur stamp duty.

This is a big plus with regard to inheritance. Always seek professional advice first before you decide to invest any of your savings.

What metals are considered precious?

There are a variety of metals you could consider as being precious. The most well known high value metal is gold. It's always in high demand and has been used in trading for thousands of years.

You could decide to buy jewellery as it's always a good way of investing wealth. White gold is often found in rings as it offsets diamonds perfectly. Don't get too excited at the idea of buying it though, as it's not a naturally occurring metal.

The addition of other metals gives its glittery white appearance. You'll find it's only slightly more expensive, and this is due to cost of manufacturing.

This precious golden metal can be found almost anywhere but is commonly associated with quartz rock. Panning is still done today even in parts of the UK.

In a similar way, silver has been used for centuries in trading and as a currency. As a metal for creating ornaments and jewellery it's very pliable. It's normally mixed with a small percent of other metals to add strength and durability.

Sterling silver is made from 92.5% of the valued metal and the remainder usually copper. You can normally identify sterling by engraved numerals 925

With the UK having voted to leave the EU, the price in dollars of this metal has increased by around sixteen percent. Investors often buy bars and coins if the price of other metals is too high.

Other precious metals include platinum. Though rarer than other metals it's actually worth less. However, as a long term candidate for investing you may find it could well pay off.

You may not be familiar with palladium as it's not so well known. Unlike other metals it doesn't have a long history. In fact it was only discovered as recently as 1803. You may find the car you drive contains palladium as it's used in making catalytic converters.

As a means of investing it could be a wise choice. There is an increasing demand with insufficient supply. The car industry is ever growing and will need plentiful amounts, so value will only increase.

Is this much sought after metal worth investing in?

As a metal, copper is very versatile and has always been regarded as precious. It has so many uses in modern life.

Many gadgets you own and use ever day probably contain some traces of it. The prediction is that shares of this metal will soar over the next couple of years, so it's definitely worth considering investing in.

Just like other metals that are considered precious, you can buy bullion bars and coins. As a way of building wealth it could prove very lucrative.

Your bullion coins could prove an easy way to free up cash in a few years. You could also buy stocks, but seek advice first.

At one time it was plentiful, but now sources are dwindling. You may find this metal proves a good addition to your portfolio.

How are these metals priced?

Current supply and demand plays a large part, as well as predicted future trends. You could make little sums of money by buying a few small bullion coins or bars when prices are low, and quickly selling when they go up.

As the market is ever changing you could in some cases be selling on the same day as buying. This could be a good way for you to learn about investing without the high risk.

You don't need to spend much money in order to make a little bit of cash. You could also consider creating a retirement fund by investing long term.

This could prove to be more risky though as prices will fluctuate over the years. However, as previously mentioned, the more rarer metals are a safer bet than others.

I know this sounds a bit strange, but does anyone know any hotel companies that are worth investing in?  I have heard that Global Great Hotels are a good one, as there is another chat on here about them.  I love holidays and I have some money to invest, so it makes sense to me lol