Is Bitcoin a Good Investment?

The secret to investing in Bitcoin successfully is simple. However, many investors ignore it and end up wasting both time and money. For this reason, follow these tips and make sure to invest in the right places. 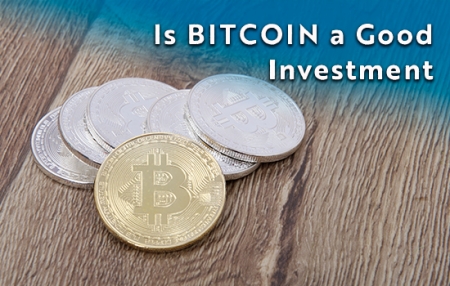 We’ve all heard of it but what exactly is it and should you be investing in it? It has been a historically volatile investment option over the years yet it has never the less seen value consistently rise on the whole. Put it this way, if you’d bought a bunch of Bitcoins when they were originally worth a couple of cents and sold up when the price maxed out around $20,000 you would be absolutely laughing all the way to the bank. There are a number of cryptocurrencies available now but Bitcoin remains the most popular and the most valuable to own. So is it an investment option that is going to stick around long-term or will it end up as another modern-day tulip market? Opinion is divided on the subject with titans of economics and finance split either way. Of course, it comes down to the opinion of the individual investor and the more information you arm yourself with the better. This article looks to provide a starting point to inform and help you make your mind up on this relatively new technology.

It is a digital currency (or cryptocurrency) that first came on the scene in 2009 and can be used to buy and sell goods and services like normal money – providing the business accepts it. Though you can get physical coins now, it is still considered essentially a nonphysical currency that exists online. Unlike traditional currencies, Bitcoin is not tied to a central bank or regulated by any outside entities. It is not printed but instead, it is mined (created) and anyone is able to do so – though it is a costly and complex process. Due to the way it is mined, there is a finite amount that can be created and as the value fluctuates so does the complexity involved in mining it. Blockchains are what make each coin unique. A blockchain is basically a public digital recording of transactions. They continually grow as more transactions are completed and begin with one block – the genesis block by the coins creator. Blockchains add to the transparency and trustworthiness of the currency as anyone can view the ledger of transactions and each one is intrinsically unique.

The origin of the currency is shrouded in some mystery. In 2009 the first block in the chain was created by Satoshi Nakamoto. Satoshi is assumed to be an alias since no one has ever been able to identify him since. The software was made publically available and people began mining the currency. It wasn’t until the following year that the first transaction took place when 10,000 coins were swapped for two pizzas. At its peak, those coins would be worth around $400 million. At the time though the coin had no real value assigned to it. Since 2011 the currency has inspired a host of over 1000 other cryptocurrencies and has experienced several booms and crashes. Along with its volatility is its infamous use on the dark web for a range of nefarious purposes due to its anonymous nature. But there is a large and growing range of legitimate businesses that accept the currency such as casinos, newsagents, marketplaces, and gyms.

Mining is basically the creation of new coins and anyone with the right hardware and internet access can make their own. How it is done is that recent transactions are compiled into blocks while at the same time solving a very complex computational puzzle. Whoever solves the puzzle first gets to place a new block on the chain and are then rewarded with the transaction fees along with the new coin. In the early days the chains were shorter and the puzzles relatively simple and it was easy for users to mine new coins. As time has gone by the chains are much longer and the puzzles are extremely complex. This has meant that in order to solve them specialist hardware is now required which uses massive amounts of processing power and electricity - effectively pushing small-scale miners out as the cost of mining now outweighs the return of their creation. The way the currency has been created means that there is a finite limit of 21 million coins that can possibly be created.

Wallets can be thought of as a place where coins are kept. Though the actual coins are not stored there (or anywhere), the wallet keeps a key to a coins address that only the owner can use. There are four main types of wallet which are mobile, desktop, web and hardware. Web-based wallets can be accessed from anywhere that you can access the internet and for this reason are seen by some as the least safe option. Hardware wallets are perhaps the safest because like a USB stick the coins can be stored on one and kept cut off from the internet and any attempts at hacking. Security is a paramount consideration as the value of the currency is so high they are a prime target for hackers.

The first thing you will need to do is choose what kind of wallet you want to use to store your coins and get one. Next, you will need to choose an exchange or marketplace to buy your coins from. There is quite a number to choose from so do some research and shop around until you find a reputable one that offers what you require. Lastly, buy the amount that you would like. As the currency is pricey at the moment you don't have to buy a whole coin. Instead, you can buy tiny fractions of a coin depending on your budget.

Is it a Good Investment?

This is the million dollar question really. If you had got in at the beginning then yes they would have been an extremely good thing to invest in as the value has consistently risen. Will it continue to rise? Of course, no one can answer that and many high profile investors and economists have advised steering clear of all cryptocurrencies. Despite that, the sheer number of them continues to rise and it seems that the technology is definitely here to stay.

Hi, we are about to join this company, and recently saw a solicitor to finalise things, solicitor was a little worried about the scheme, we have read the reviews on this forum and would like to know if anyone has had some recent i.e, 2020 experiences, we have had to finance this with equity release on our house so really need the return to be true.